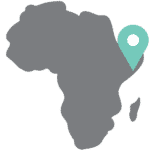 Peace Renewable Energy Credits (P-RECs) have the potential to expand the renewable energy revolution to vulnerable regions, improve quality of life, and create economic opportunities. A P-REC is an International Renewable Energy Certificate (I-REC) with an additional certification  by Energy Peace Partners (EPP) of the social and economic co-benefits associated with the  project.

Developers like Dayah Electric Power Company (DEPCO) are extending the benefits of solar energy to countries in Africa, where energy attribute certificate (EAC) markets have yet to be fully developed. Currently, DEPCO owns and operates a diesel-powered mini-grid in Somalia’s Abudwak City, the largest city in Galmudug State, which it plans to convert to a solar-plus-storage hybrid system. To reduce reliance on diesel-powered generators, DEPCO will install a 400kWp solar power plant.

Starting in 2022, approximately 700 P-RECs are projected to be issued each year, although energy production estimates will be confirmed upon final system build. These would be the first EACs and P-RECs to be issued and sold from Somalia. P-REC purchases from the Abuduwak solar plant will fund the phased implementation of a community solar street light project that delivers a significant positive impact on quality of life and safety for Abudwak residents.

+ The solar mini grids reduce the need for carbon intensive forms of energy that are typical in Somalia. This has a direct climate mitigation impact by reducing local air pollution and decreasing carbon emissions.

+ DEPCO’s solar sites will provide power to rural households in Somalia, a nation that has been characterized by underdevelopment for decades, with approximately half its population lacking access to electricity.

+ The P-REC-funded community streetlights will increase safety and security, and allow local businesses to stay open longer. The electricity connections enabled by the solar mini grids will increase overall quality of life for rural Somali households.