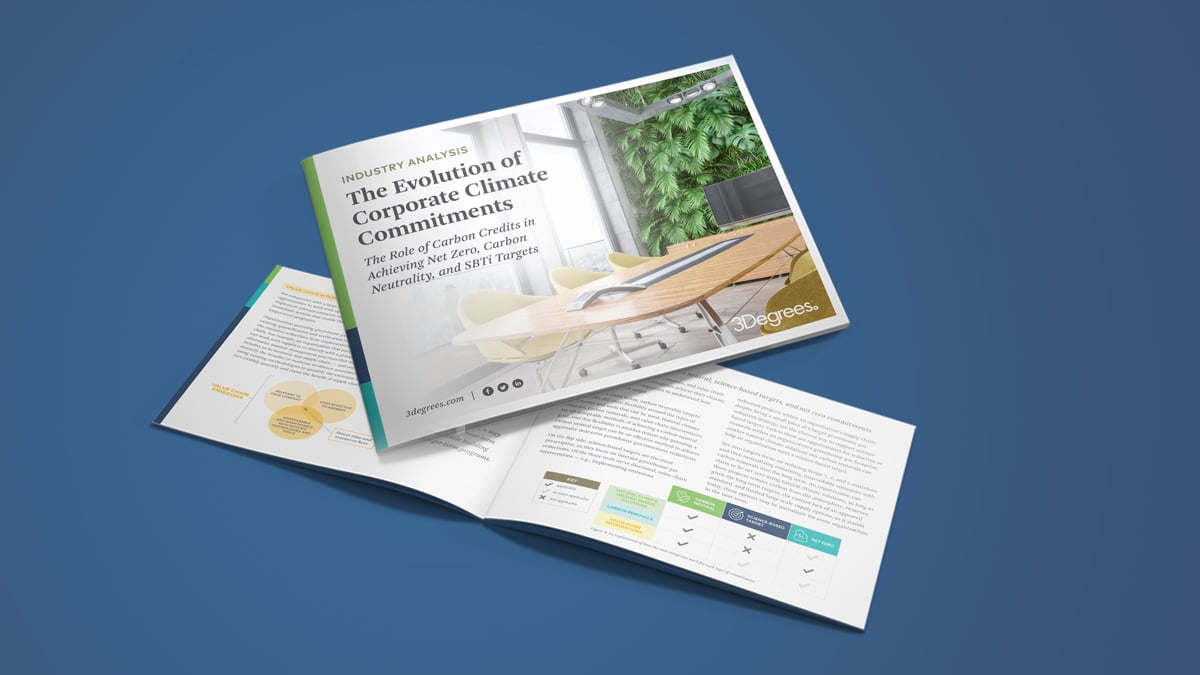 Organizations around the world are increasingly focused on setting and achieving ambitious GHG reduction targets including net zero emissions, carbon neutrality, and science-based. However, with evolving methodologies and tools, understanding available options and developing a strategy for achieving these targets can be challenging.

Explore this white paper to learn how your organization can develop its own strategy for significant and impactful decarbonization. “Green growth” — the concept of decoupling economic expansion from negative environmental impacts — is by no means a new idea, but it is more frequently discussed in textbooks than in national legislation. In Europe, however, this is no longer the case. The European Green Deal is a commitment from the European Commission for the EU bloc to be climate neutral by 2050. The climate-related investments necessary to achieve this target are intended to serve as both a near-term stimulus to help the European economy recover from its pandemic-induced recession and a catalyst for a continent-wide green economy transition. While this cements the EU’s role as a global climate leader, European regulators are still in the very early days of making this commitment a reality. For companies seeking to proactively reduce their carbon footprint in Europe, the Green Deal is welcome news, and they want to learn more. Below are answers to some of the most common questions being asked.

How is the Green Deal being implemented across Europe?

The Green Deal is an aspirational commitment that will be underpinned by forthcoming EU-level legislation and then implemented via EU Member State policies and regulation. EU legislation will come in the form of the European Climate Law, which will bind Member States to the 2050 climate neutrality target, then national-level policy will follow suit. The European Commission has also committed to developing a Just Transition Mechanism to support the green economy transition in Member States that will be subject to the greatest economic hardship, i.e. those whose economies are most dependent on fossil fuels. The EU is committed to leaving no country behind in its pursuit of climate neutrality.

What sectors are most affected by the Green Deal?

In addition to supporting biodiversity and agricultural initiatives, the Green Deal will also support clean energy and decarbonization across four key sectors:

What does this mean for companies seeking to reduce their carbon footprint in Europe?

While the Green Deal aims to reduce greenhouse gas (GHG) emissions by 55% by 2030 en route to zero by 2050, the EU’s 2030 renewable energy target remains at just 32%. For this reason, the European Commission is evaluating whether and how its Renewable Energy Directive should be adjusted and strengthened in the context of achieving the more ambitious targets set out by the Green Deal. Corporate renewable energy buyers can expect increasing accessibility to renewable power purchase agreements (PPAs), increasing reliance on Guarantees of Origin (GOs) to track electricity use, and increasing adoption of biomethane and hydrogen GOs in the gas sector. Companies with vehicle fleets can also expect enhanced fiscal support for the decarbonization of these services.

How much will it cost, and what should companies look out for next?

Green Deal investments will be jump-started by the Recovery Plan for Europe, which bolstered the COVID-19 recovery budget to €1.8 trillion, while committing 30% of these funds to fighting climate change. The European Commission expects it to cost approximately €1 trillion to reach its 2030 targets, with these funds coming from the EU budget, national governments, and the private sector. As the Green Deal commitments are gradually embedded into legislation and regulation across Europe, companies can expect an explosion of green growth opportunities, especially in the energy and transport sectors. They should also be aware of changing policy environments geared toward facilitating this green economy transition and should stay apprised of incentives for companies doing their part to become climate neutral by 2050.

Despite how ambitious and unprecedented the Green Deal is, the true test will come in the form of maintaining unity across the bloc and ensuring that investments are properly leveraged to efficiently support economic growth that benefits both people and the planet. Once successful, this initiative will serve as a proven blueprint for green economic recovery around the world.

If you have additional questions about the Green Deal, or how it might impact your organization’s emissions reduction plans in Europe, please feel free to reach out to us.